Sometimes on the weekends when Lauren is at work and I get up to a sunny day and I don’t have anything to do with my exams behind me, I feel like going out adventuring and exploring nature with my camera.  But I invariably stay in bed and putz around the house for most of the day and run errands or buy groceries or update my Bachelorette bracket (my money’s on Luke, but James T. and Wells are my personal favorites) because I suppose going out on adventures takes effort and I’ve been feeling lackadaisical.  I also have a final written assignment to work on for my last actuarial certification and although it’s not due really soon, I’ve been putting it off.  I wanted to work on it over the weekend but one of our small group members was back temporarily from being overseas and a few of us got together over Memorial Day weekend and hiked around LA.  On Sunday we went back to El Scorpion, a hike just down the road from us.  Every time we go Lauren and I go down different trails and that day was no different and we ended up on some pretty field on a hilltop.

The trail kept continuing and a part of me wanted to see where it led, but it was getting dark so we just turned around and ate a late dinner.  The next day a few of us decided to go on yet another hike.  We hiked seven or so miles, ate enough snacks to make up for the lost calories, and I was even able to take some photos and got them to strike a few pretend-you-guys-like-each-other-and-I-just-happened-to-catch-you-guys-having-a-great-time poses. 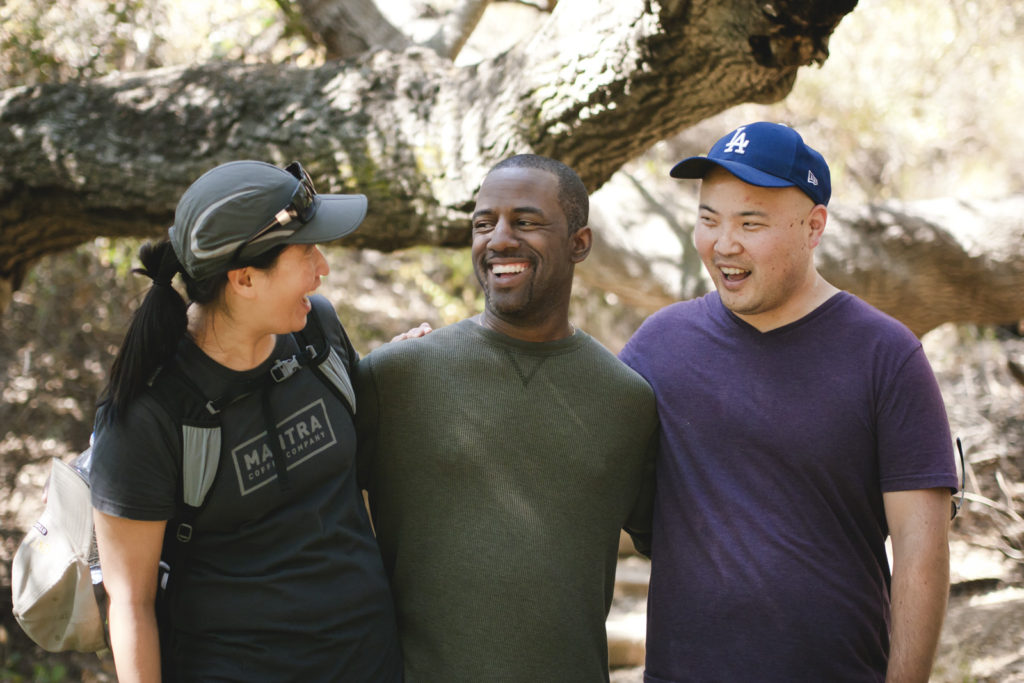 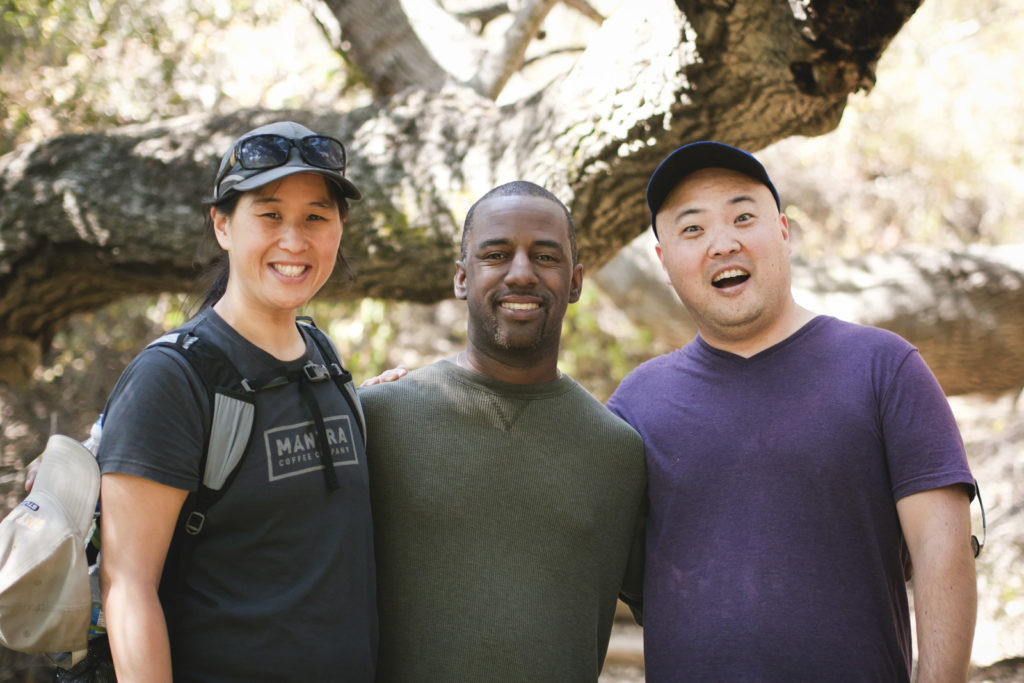 So that was my Memorial Day weekend.  And I was even able to make it back in time to cook stir-fry and watch The Bachelorette (Chad is soooo evil).

I had two plans for this weekend.  Study to retake my last exam or DO A WHOLE LOT OF NOT STUDYING BECAUSE I FINALLY PASSED MY LAST ACTUARIAL EXAM!  I’m doing the second! 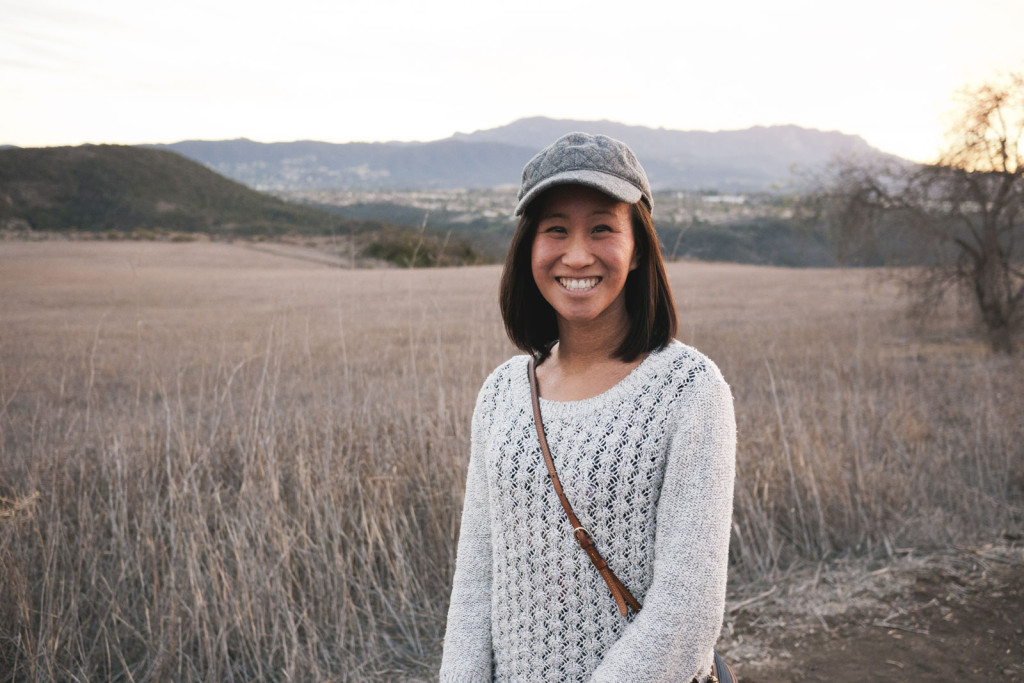 If I had my way I might go around and take random photos of people, which is probably really weird so I have to patiently wait until coworkers like these ask me to take a team photo of them. 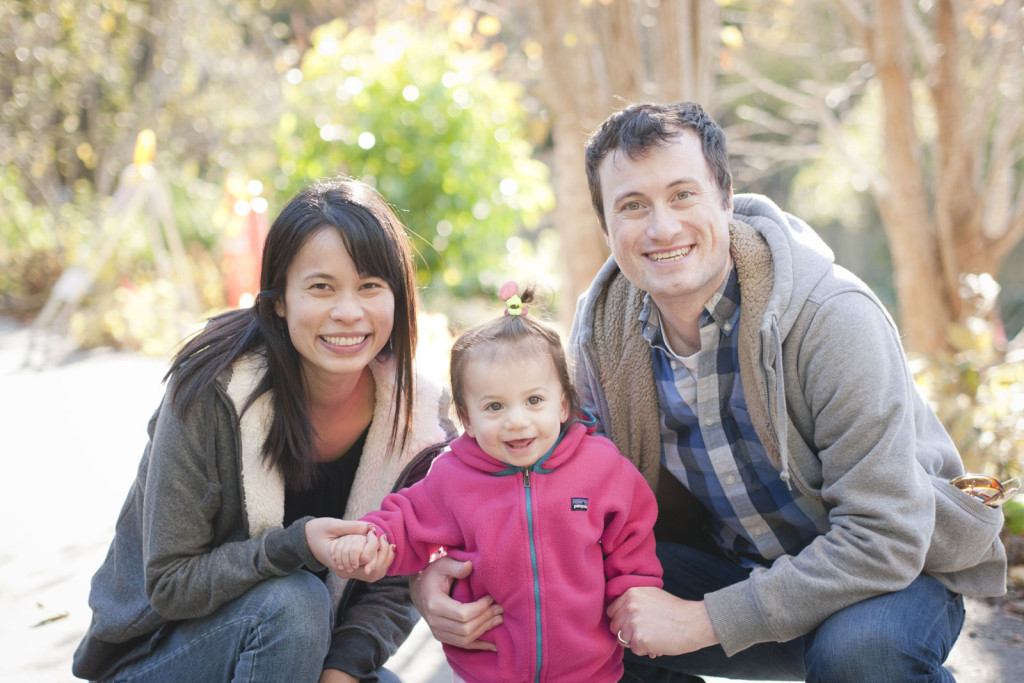 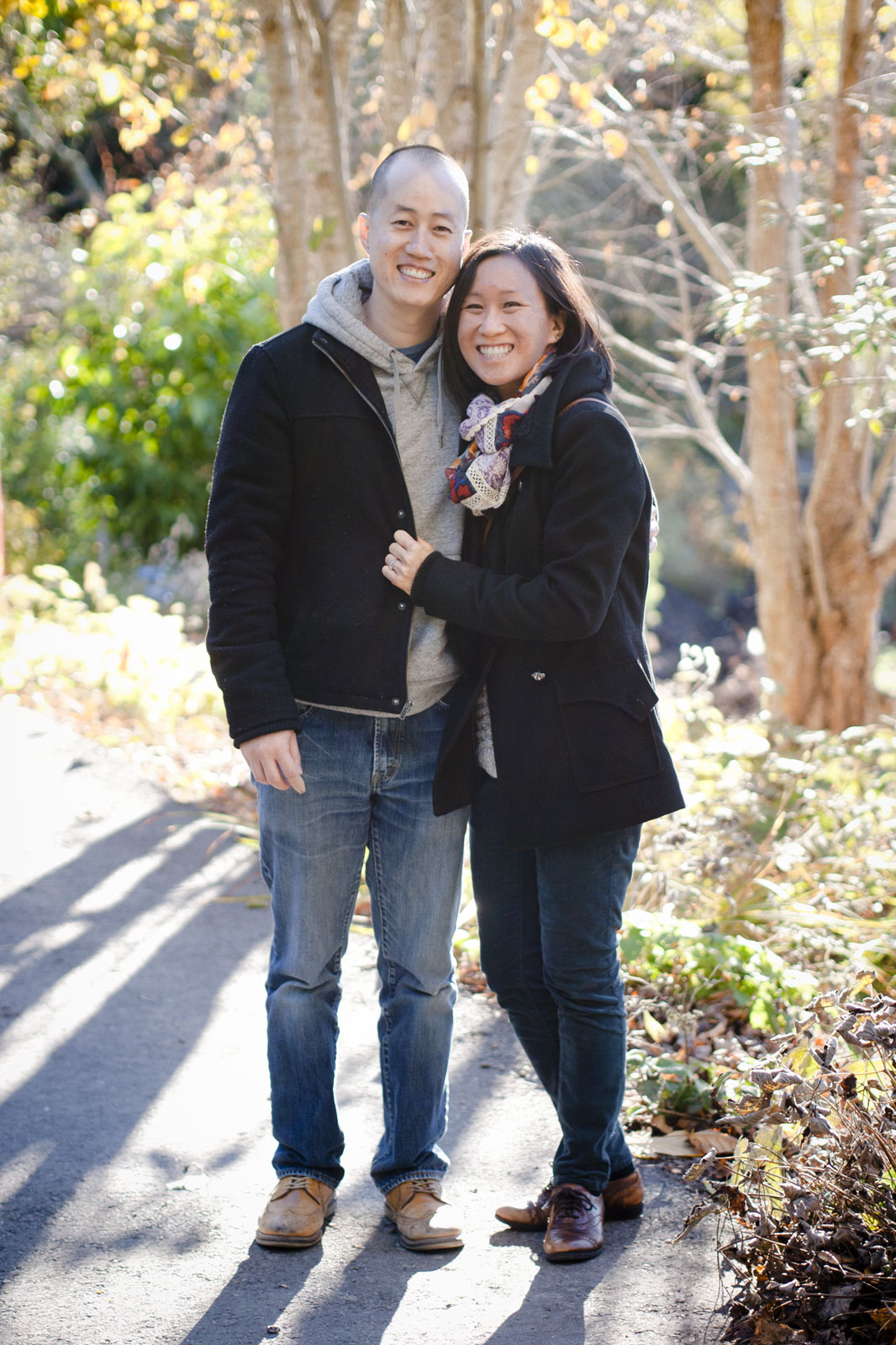 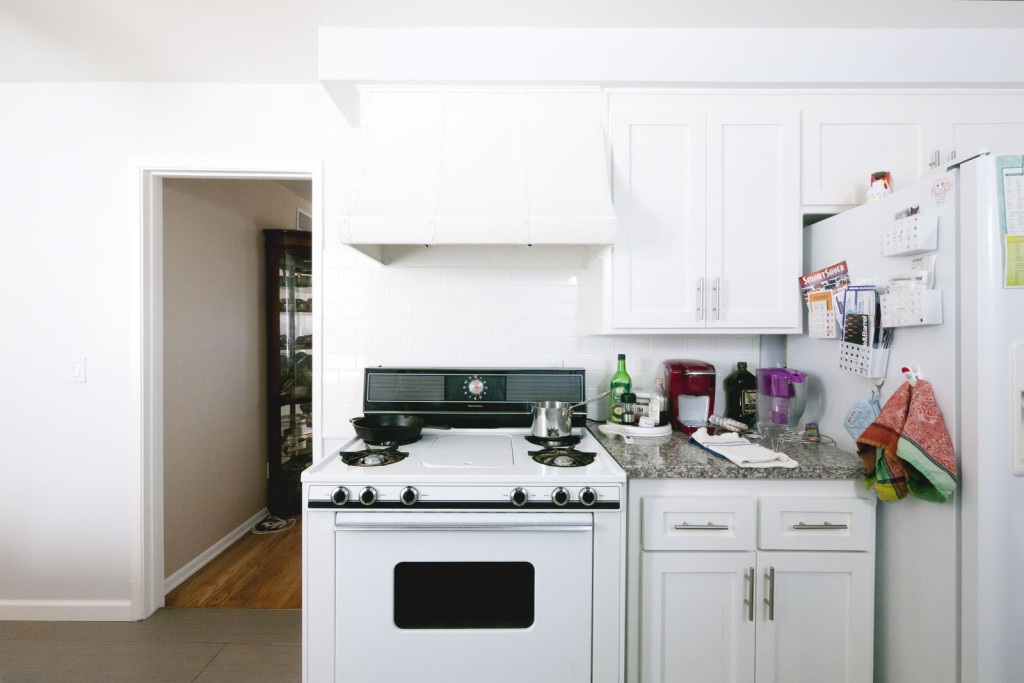 I see some of my extended family once every decade or so (give or take a decade), so it was surprising to get an email from my Uncle Paul and Auntie Lin to meet up for dinner this weekend, as they were in town.  They found me through the interwebs!  We ate at Thai town and we caught up on family stuff.  They gave me a couple photos, and one was an old one of my dad and family:

Lauren says she can see the resemblance but it sort of reminds me how my brother used to look. They also gave me one of their family:

After getting home, on close inspection, I realized they’re playing the exact game Lauren and I just purchased a couple months ago. Splendor! Maybe it’s in our genes… I wonder if one of them managed to get a monopoly on the red tokens just like I did.

I’ve been contemplating the notion of what my life would be like if I got a new camera.  Maybe the photos I took at my coworker’s baby shower in the darkened restaurant wouldn’t be so grainy with a larger sensor.  Maybe I could transfer them over wifi to my phone and post them immediately!  Maybe I woudn’t have to attach an intervelometer everytime I wanted to take multiple shots on its own.  Maybe I could touch the screen where I want the camera to focus!  Maybe my low light shots would be sharper with in body stabilization!  With so many things to contemplate, I had to make a spreadsheet.  And scour the web for sample photos, and watch video after video on various cameras and jot down DxOMark ratings for various cameras.  The XT1s, the a7series, the OMDs, the new GX8…  on paper they all look really cool!  But I don’t know, they are all kinda pricey.  And I’d have to get new lenses for some of them.  And I’d have trouble justifying spending money that’s essentially Lauren’s.  And maybe they’d lose their charm after awhile.  And maybe I just need to get better at taking photos.  And do I really need more photos of Lauren and me?  And shouldn’t I get back to studying?  I guess it’s going to be awhile before I get a new camera… 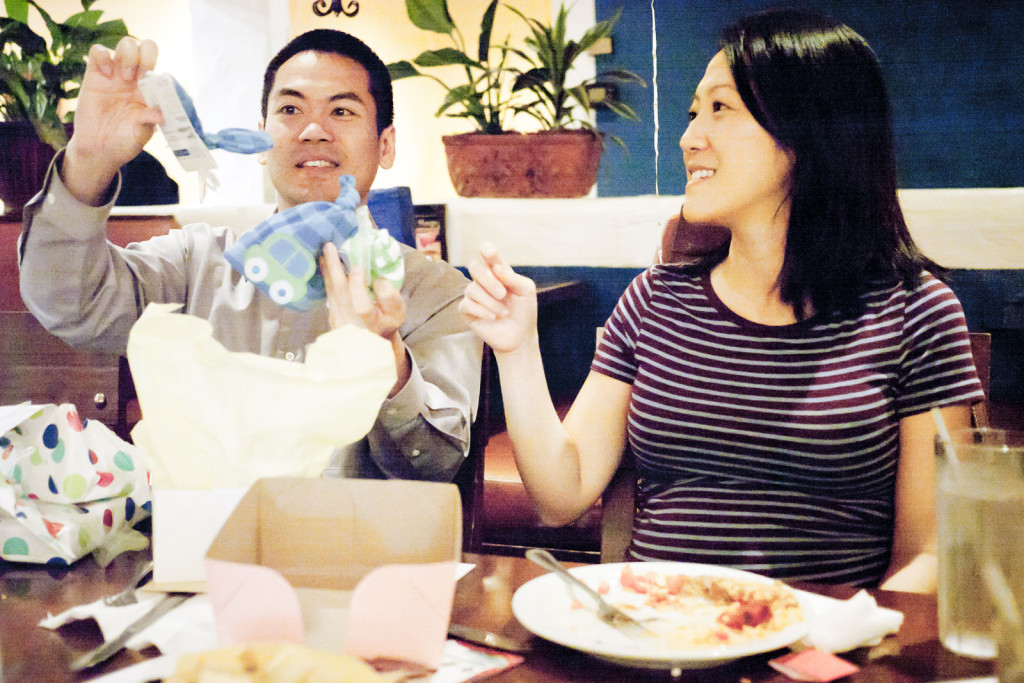 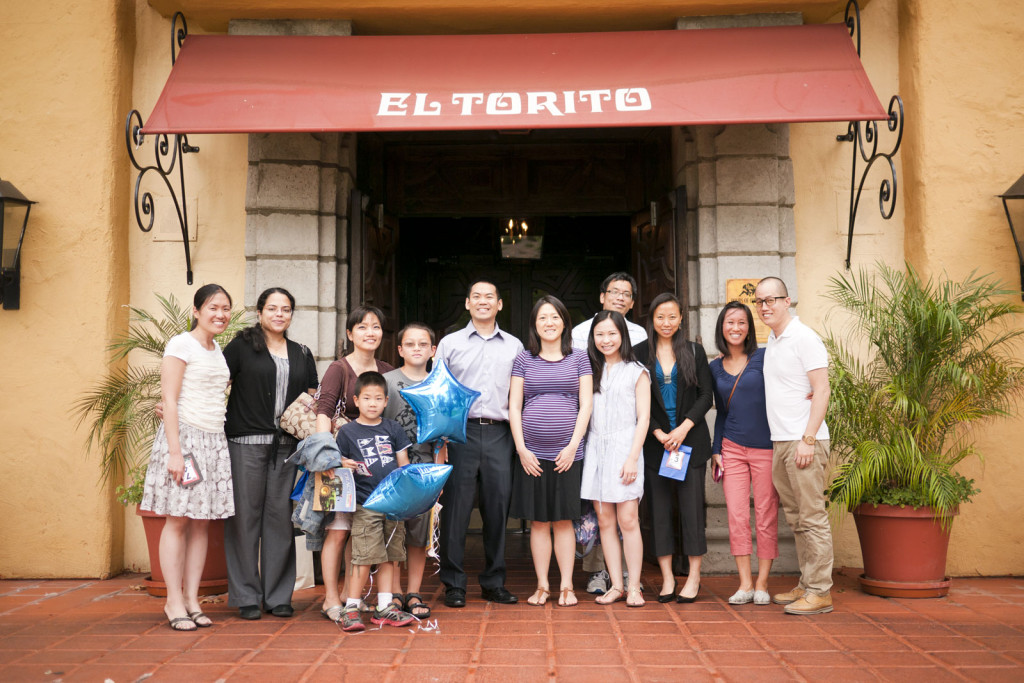 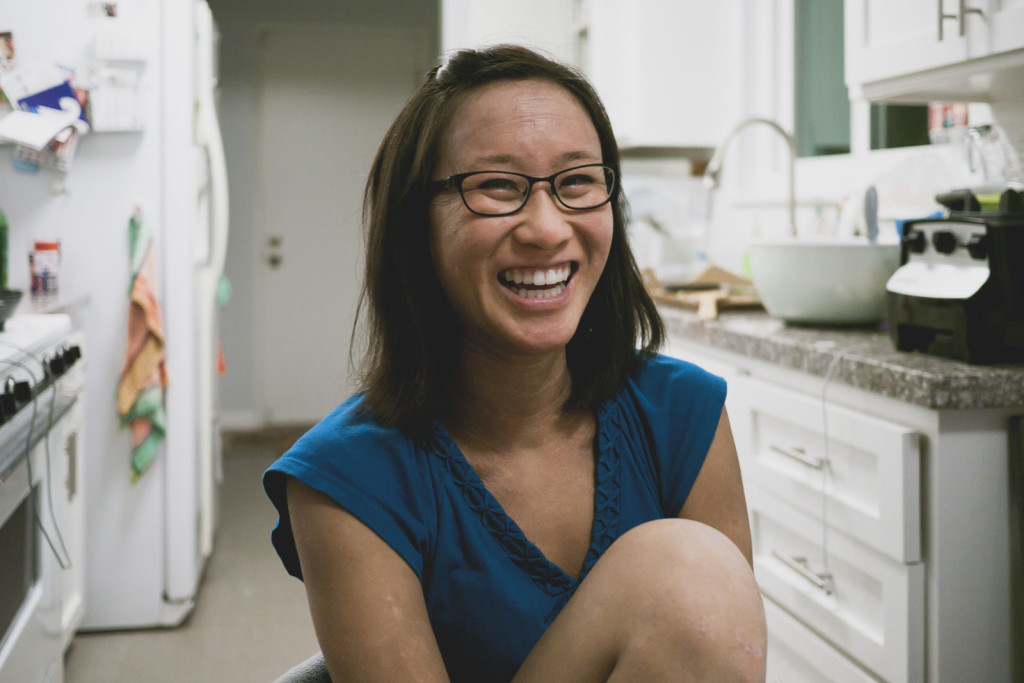 I turned 38 recently.  Lauren took me to this place where you were locked in this room for 45 minutes and had to get out by solving puzzles with the other people in your group.  I was pretty clueless most of the time but was able to figure out what the words over the door meant and we were able barely escape with a minute and a half to spare!  There was this kooky guy in our group that made the whole experience really fun since he was, well, kinda kooky.  He was so kooky that I thought he was hired by the place to enhance the experience, but it turns out in the end he was an actual kooky guy.

Afterwards Lauren took me to this really nice restaurant near Malibu in the mountains.  It was an outdoor restaurant, a country kitchen type of place with all these kids running around in the middle of their meals as they had all these lawn games everywhere.  It was really nice place to spend a relaxing Sunday evening and we ended up playing shuffleboard, carving a chicken (one of their entrees was a whole chicken), and taking some more photos. 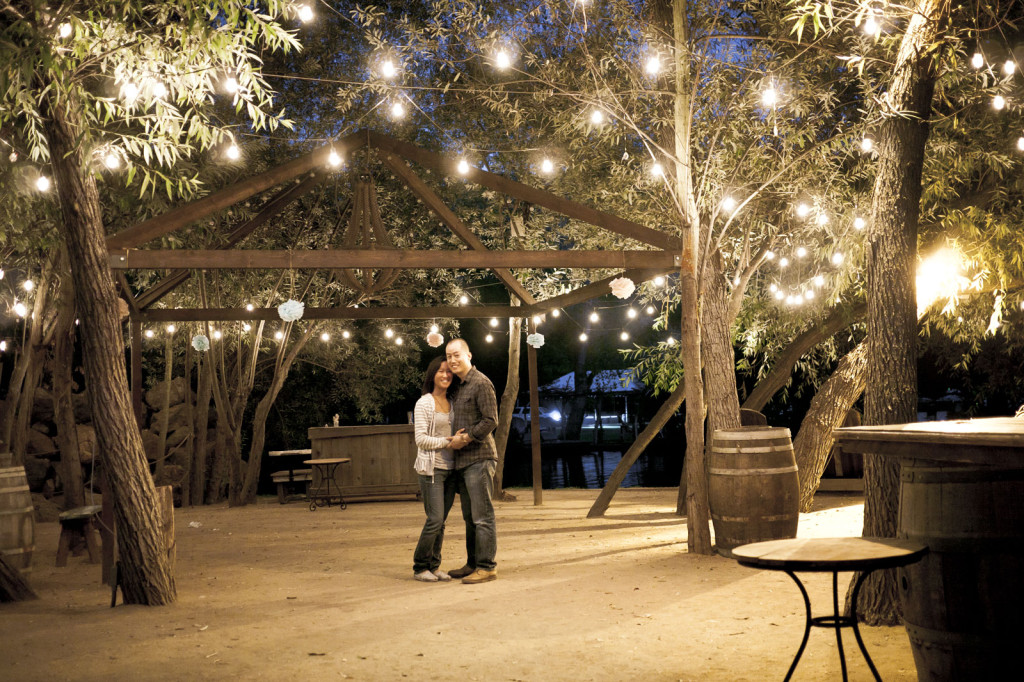 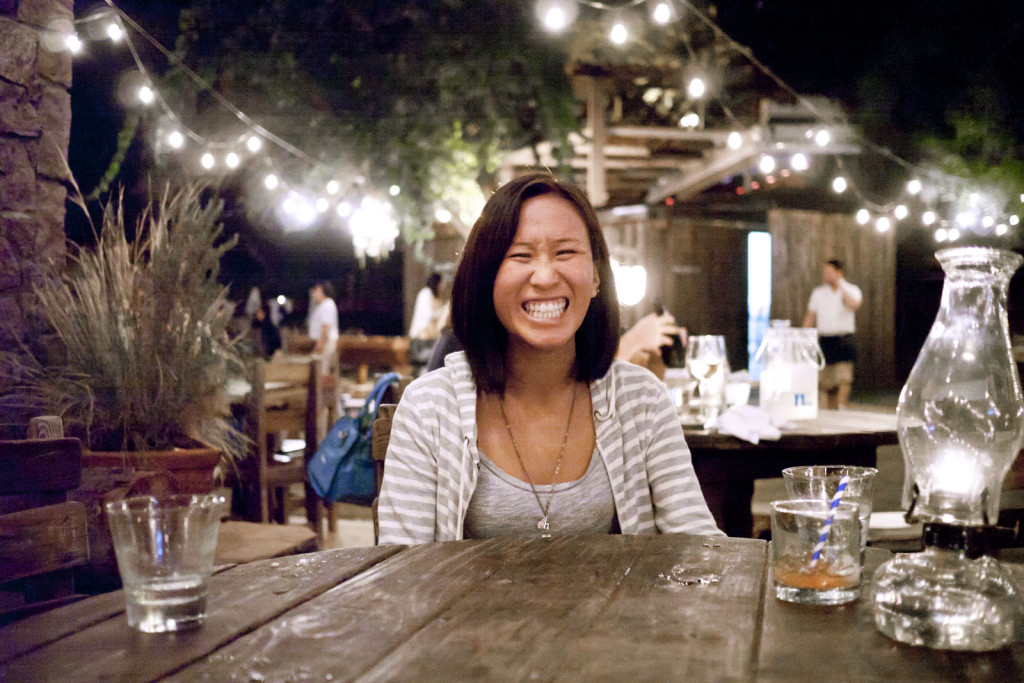 One of these days I’m going to branch out and start taking photos of something other than the same two people.  But until then…

We got a whopping 800+ photos from our wedding!  I figured 10% is a pretty good proportion to leave on the web for possible posterity.  I must have listened to Ed Sheeran’s song, Photograph, a half kazillion times while sorting through these photos.  It was on repeat.  I’m addicted to that song…

Name part of a car.  Drop the fifth letter.  Now reverse the order of the last three letters and the result reading from left to right will name a major American city.  What is it?

I guess the chance to be on the radio is pretty slim but I’m still excited to have finally figured out one of them!  Maybe it’s better if I don’t get picked and embarass myself not knowing any of Sunday puzzle answers .  It would be like 11th grade social studies all over again.