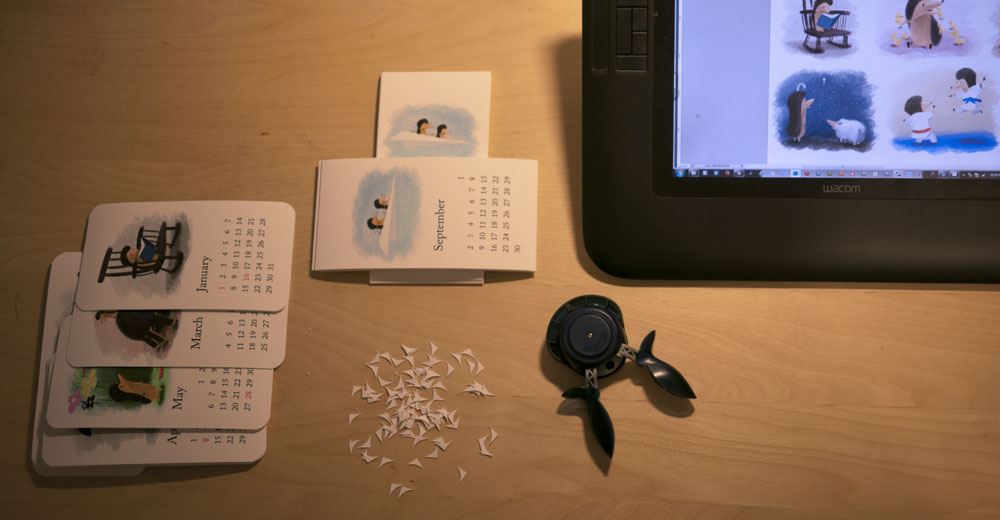 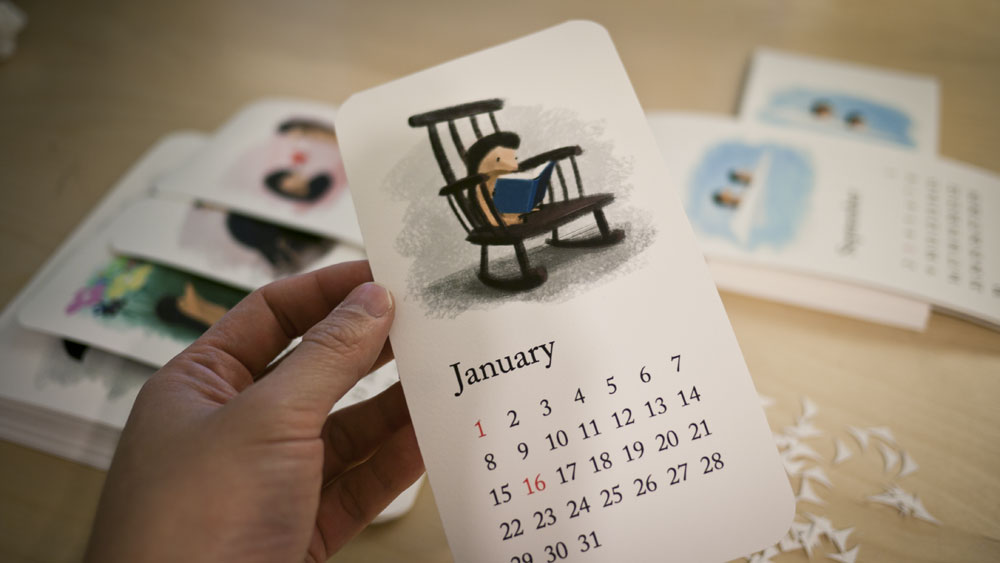 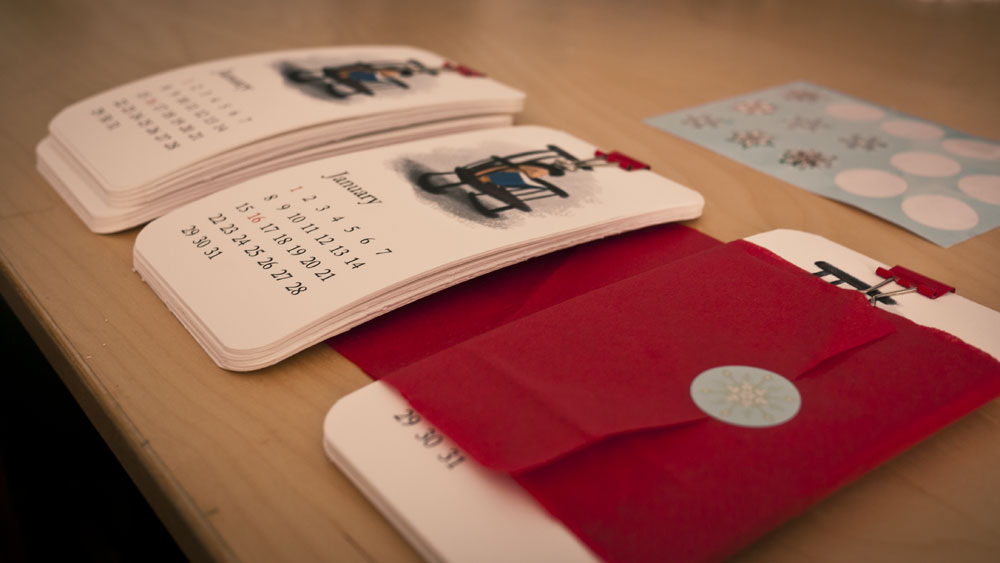 I decided to make another calendar.  I’ve been using this online printing service which I really like and is cheaper than local print shops but it’s still a bit more than I think most people would spend on a calendar. If I discover I got the dates wrong I think I’m going to cry. 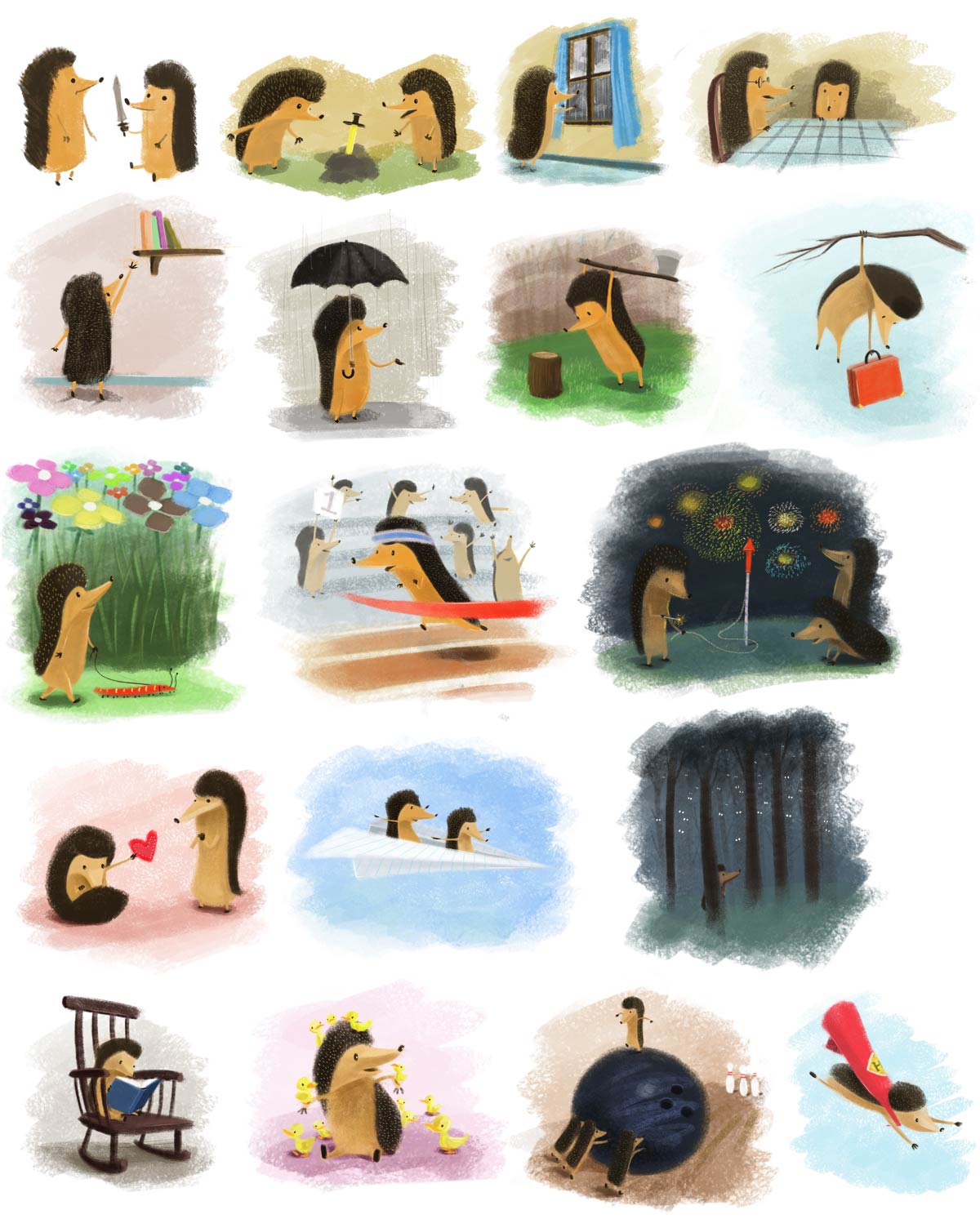 I really need to finish that first module exercise … I feel like that hedgehog who’s envisioning his rainy destiny through the window.

I originally thought I’d try making a small dragon rubber stamp for my small group’s make-it-yourself gift exchange but I was doodling away on the cintiq when I decided it’d be easier just to do a painting and print it as a calendar.  Why whittle away at a little rubber pad when I can use the wonders of modern print technology to make my image. I spent way too much time with paint thinners back in the day. I’m glad I finished and liked how it turned out, despite being Typical Chinese Dragon.  It took most of yesterday and some of today to iron out all the details (the scales took forever).  For some reason the thought occurred to me to try to do not one but twelve dragons, one for each month of 2012 (which is the year of the dragon, btw).  I could sell it online!  It could be an internet sensation! I could make a million dollars!  Let’s see by my current readership I’d have to charge, hmm, $333,333.33 for each one.  I’m pretty sure these figures are credible.  I am a professional number cruncher after all. I’m also starting to see a positive correlation with being invested in painting and the messiness of my room.

A old Philly friend mentioned that my old pastor from Phiadelphia just moved and is in town working at a church downtown so I thought I’d stop by the evening service to say hello.  It was a blast from the past!  We chatted for a bit and I found out he lives pretty close to me, around where I almost bought a house earlier this year.  We could have been neighbors!  Even more bizarre is that I got to catch up with two other people I haven’t talked to in a couple years, and one let out a big “OMG!” (or something to that effect) when she saw me.  It felt somewhat neat that I can instill a feeling of shock and mild terror when I tap someone on the shoulder. 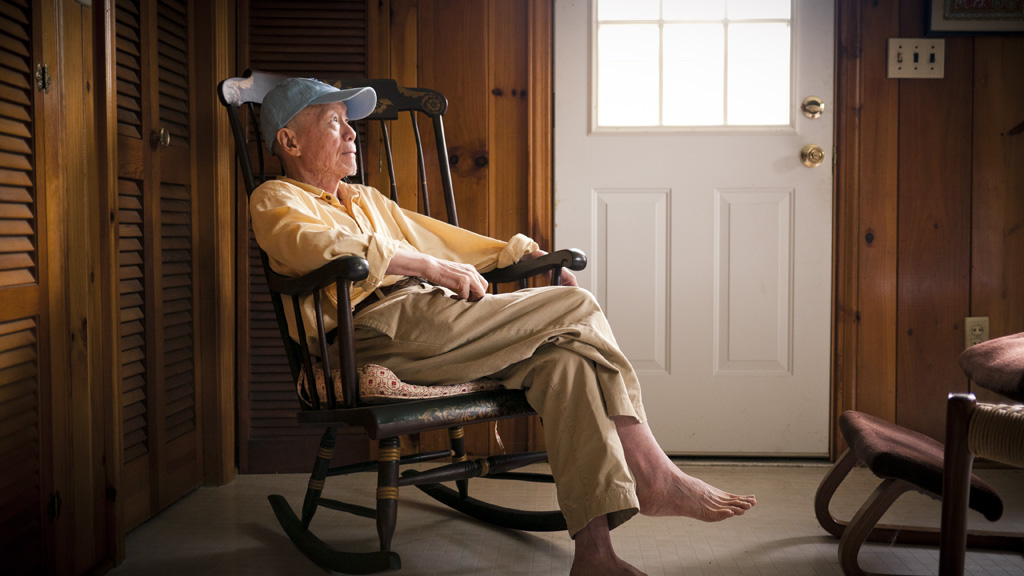 &nbsp; I went to visit my dad in North Carolina over the weekend.  There were a few things I remembered from growing up scattered around the house like that kneeling chair on the right (supposedly good for your posture), a Royal Dalton water filter, and this big Norman Rockwell artbook, which I’d probably appreciate a lot more now than as a kid.  I think I also remember that same yellow shirt that he’s wearing from when I was growing up.  I see my dad so infrequently that I notice remarkable aging each time I see him, and he’s starting to remind me a lot more of how I remember my grandfather. North Carolina is very picturesque, serene, and non-asian.  For whatever reason, my dad has always chosen non-asian places to live.  I think you can tell you’re in a non-asian place when you see a sign for “Asian restaurant” that says “Chinese Food, Sushi & Steak.”  Another indicator are t-shirts that say “Your girlfriend looks rougher than a dirt race track in the rain.” 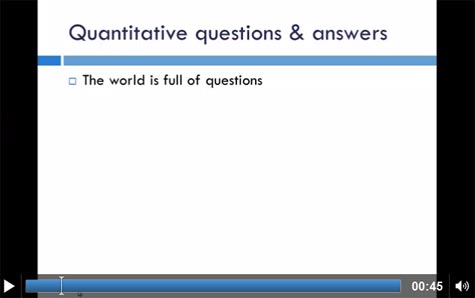 &nbsp; It is full of questions!  I think this is why I like my online stats class.  Although I’m starting to think that the number of words and complicated formulas on the slide is somehow negatively correlated with my enjoyment of the subject.  If only I could model that… Enj = B0 + B1 Words  + B2Words2 + B2 Formulas + … ah forget it.

&nbsp; Well I finished my video collage of work.  Having lent my camera to Vashti (sorry you turned out blurry) over the weekend, I ended up just deciding to put together whatever footage I had.  I think I learned several things:
The music is the song “Arm Drawing” from the 500 Days of Summer score, hence the title of the video.

In the past month and a half or so since I passed the exam I’ve been experimenting in cooking, riding my bike more (somewhat), and trying to learn how to play a third song on the guitar, Atmosphere, by Marie Hsiao (aka Mree), who’s a high school student from New Jersey.  Not being musically gifted, I’m finding I resort to the brute force method of guitar learning:

&nbsp; That is: 1) listen to song in slow mo (over and over again), 2) write down notes (over and over again), 3) play (over and over again).  I’m still on #3.  I found the brute force method helped a lot on the exams in trying to solve quadratics and such without going through the tedium of algebra.  Plug and chug (à la TI-30XS’ table function) FTW! If anyone stumbles on this page looking for the tabs/tablature/sheet music for this song, you can get my version of it here.  Caveat: I’m pretty sure it’s not 100% accurate.