I took a break from painting today to get some In N Out and apparently a family in front of me paid $50 to treat other people behind them and I guess I was the last one to get treated!  That was a nice surprise! The painting turned out pretty well too and I sent it off to be printed.  I can’t really post the whole thing but here’s a snippet: 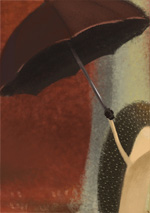 I took my test on October 30th and I have a couple weeks left until the results come out (not expecting to pass). I thought I would have all this free time after the exam but I’m finding myself busy, mostly in the good hanging-out-with-people type of way. There are still a couple things I was hoping to get done with by the end of the year, one of which was writing a recommendation for my friend for seminary. I must have started that thing at least a half a dozen times (I get the impression that he’s having the same difficulty writing on his end), and there are all these things I like about my friend but it all ends up sounding generic (I guess all Christians love Jesus) or random.  Like the fact that he buys kids’ clothes to wear or that he’s really good at avoiding small talk. Can you really put those things in a scholastic recommendation? He buys kids’ clothes to save money and I think I like it because, well, I guess he’s sort of an unconventional guy and I like that. He used to deliberately take the bus to identify with people who don’t have cars. He became a legal parental guardian to exchange students. He works as a nanny. I guess I always thought that doing what Jesus did and laying down your life for other people was a bit unconventional, and he’s more unconventional in that regard than most. He’s also very good at avoiding small talk, mostly because he doesn’t like it. I don’t either, but it’s just easy to talk about the weather or what you ate for dinner yesterday or this and that after service, and it almost seems that small talk is part of church life. I’ve noticed that he’s more in-your-face about asking personal questions and getting in their space (I think people like it but he says is a turn off for about half the people he talks to) and maybe that’s not really anything to recommend about a person but I think he is curious about people and what makes them tick.  He’s good at remembering tiny details about a person  and I think he just likes people and wants to be involved in other people’s and other families’ lives. Anyway, it’s 5 am and I should try to sleep more.  This is the second time I’ve started this post.  Maybe I just need to get the hang of writing again and write more.

I just came back from another trip to the Bay Area, this time for only a day. On the way back, the stewardess asked me what I wanted to drink and I just had water. She asked me if I wanted peanuts and I declined. I never decline! The kid in me always liked those airplane snacks and I felt very adult-like in sticking with plain water. I got my cholesterol checked at the company health screening last week and it was on the border of being higher than the average range. That also made me feel adult-like, but in a different way.

Nothing says hardcore actuary like studying for the group and health core exam … in the hospital! I came up to the Bay Area on an emergency trip last Tuesday, taking some time off work. I’ve spent some time with my friend and meeting my friend’s family and my friend’s family’s friends (but not my friend’s family’s friends’ families’ friends’ friends’ families). Although the family is going through a difficult time, it has been nice spending time with them. On the down times I’ve been getting in some studying in the San Mateo public library and in the hospital foyer. I guess it would be more hardcore would be if I was studying in the OR under local anesthesia with my cards in one hand while being on the phone with my insurance company. In Canada. While studying the card on “Concerns about the Canadian Medicare system” (card #17). With the case manager quizzing me. HARDCORE!

It’s hot! We don’t really use the a/c a whole lot so I’m finding this is one of the biggest motivators to staying at work late to study… 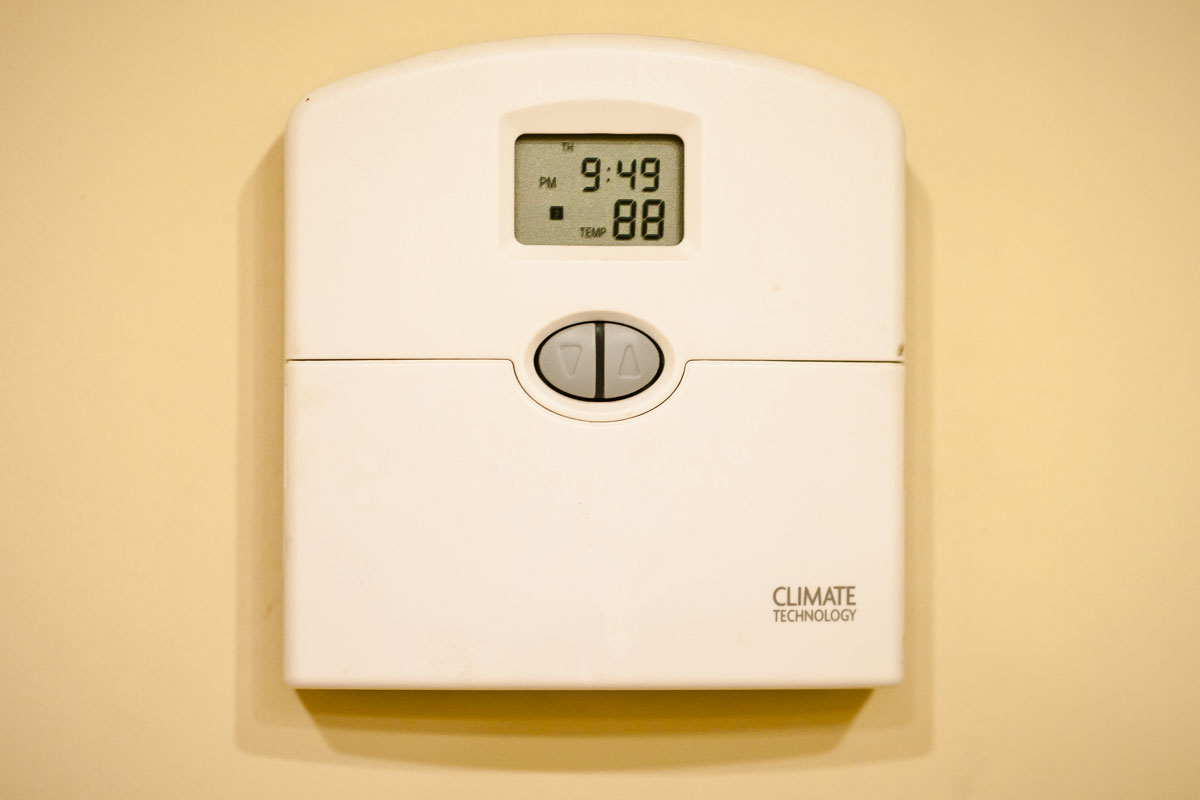 I went up to the bay area over Labor Day weekend and it was nice to get away (especially from the heat) to the bay area to meet new friends and to visit old ones.  I got to see the Bowlbys’ new house, which had a pull-up bar in their back yard, and I managed to beat their previous pull-up record of two (I did three!). 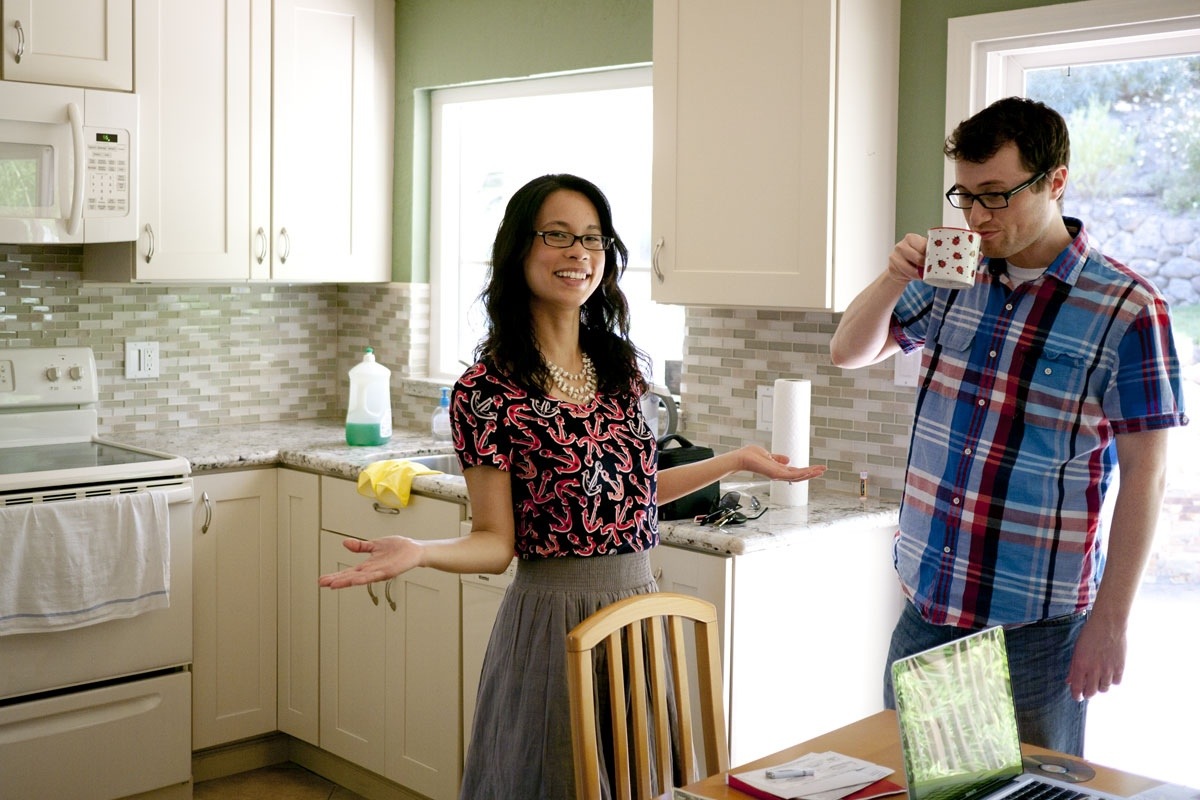 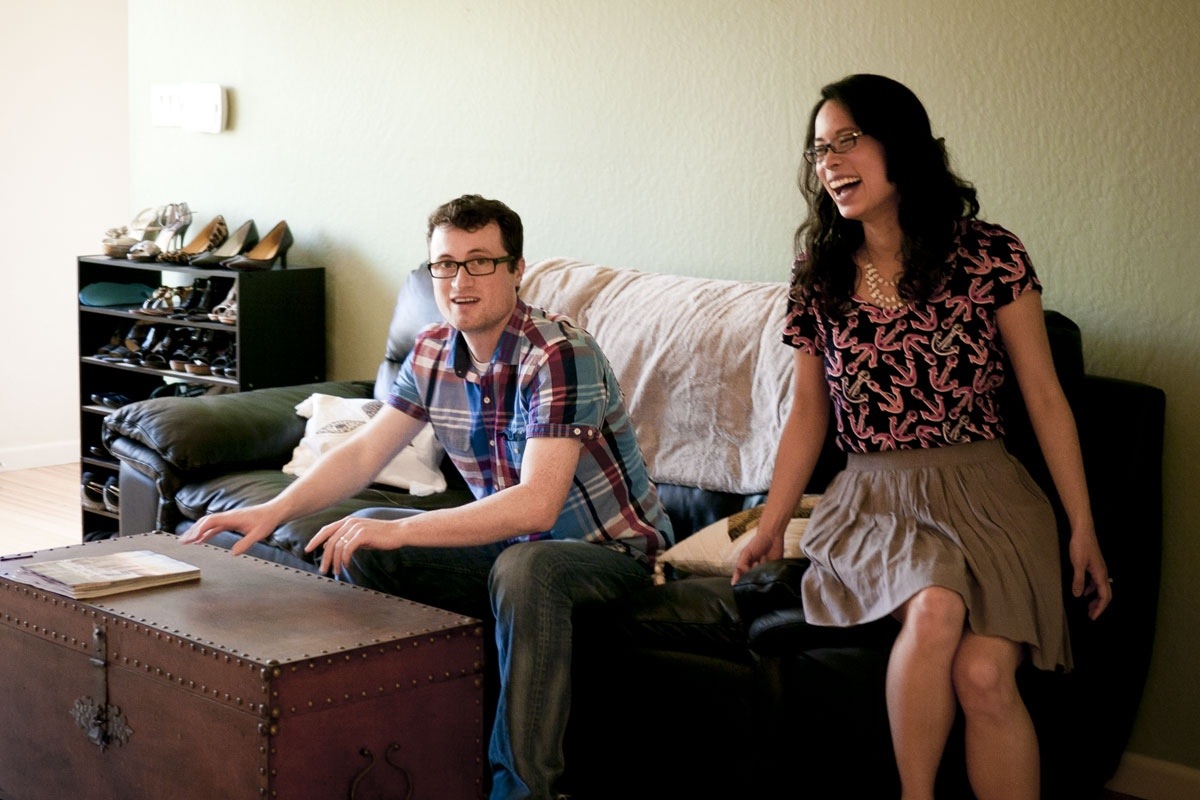 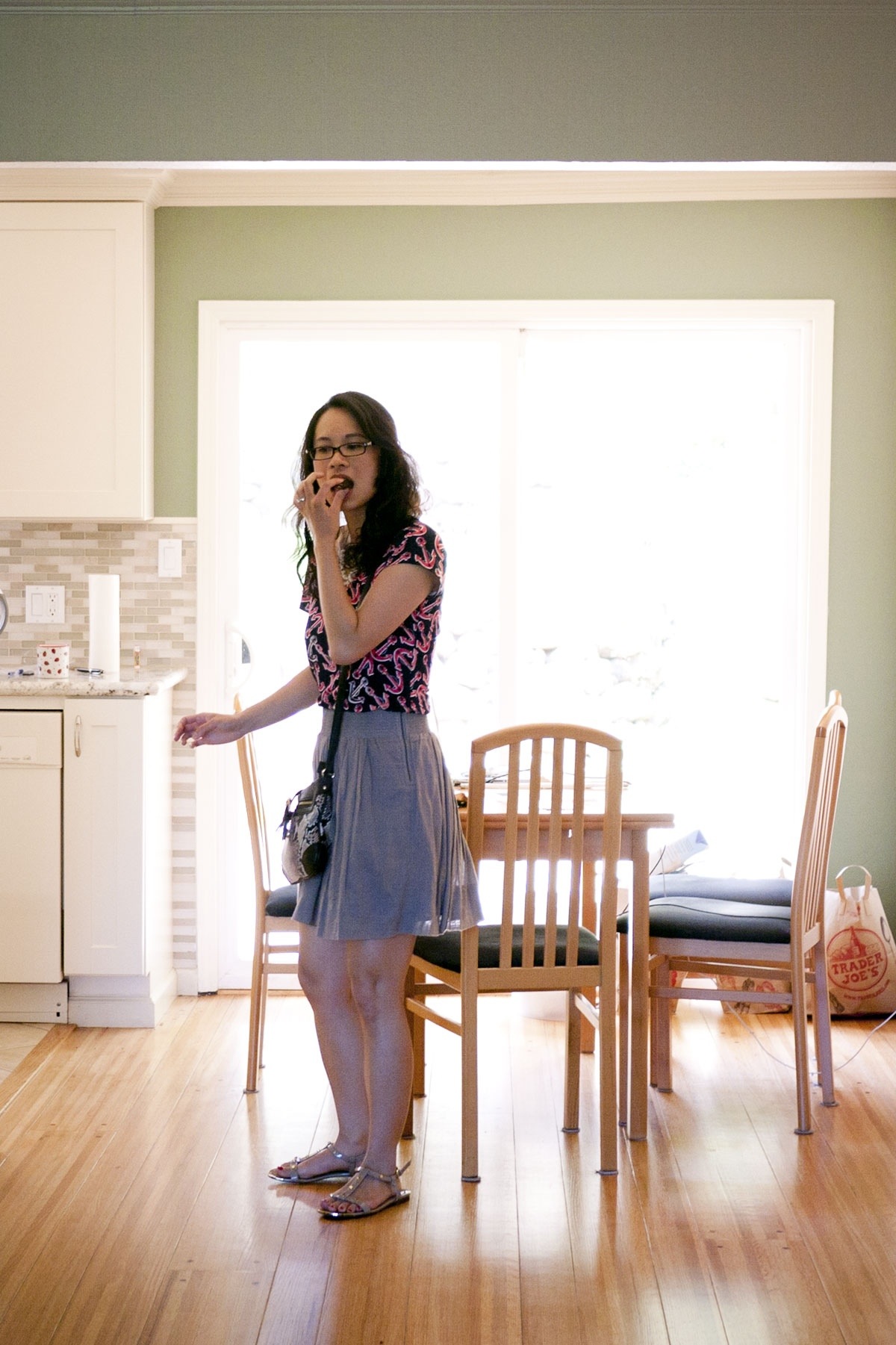 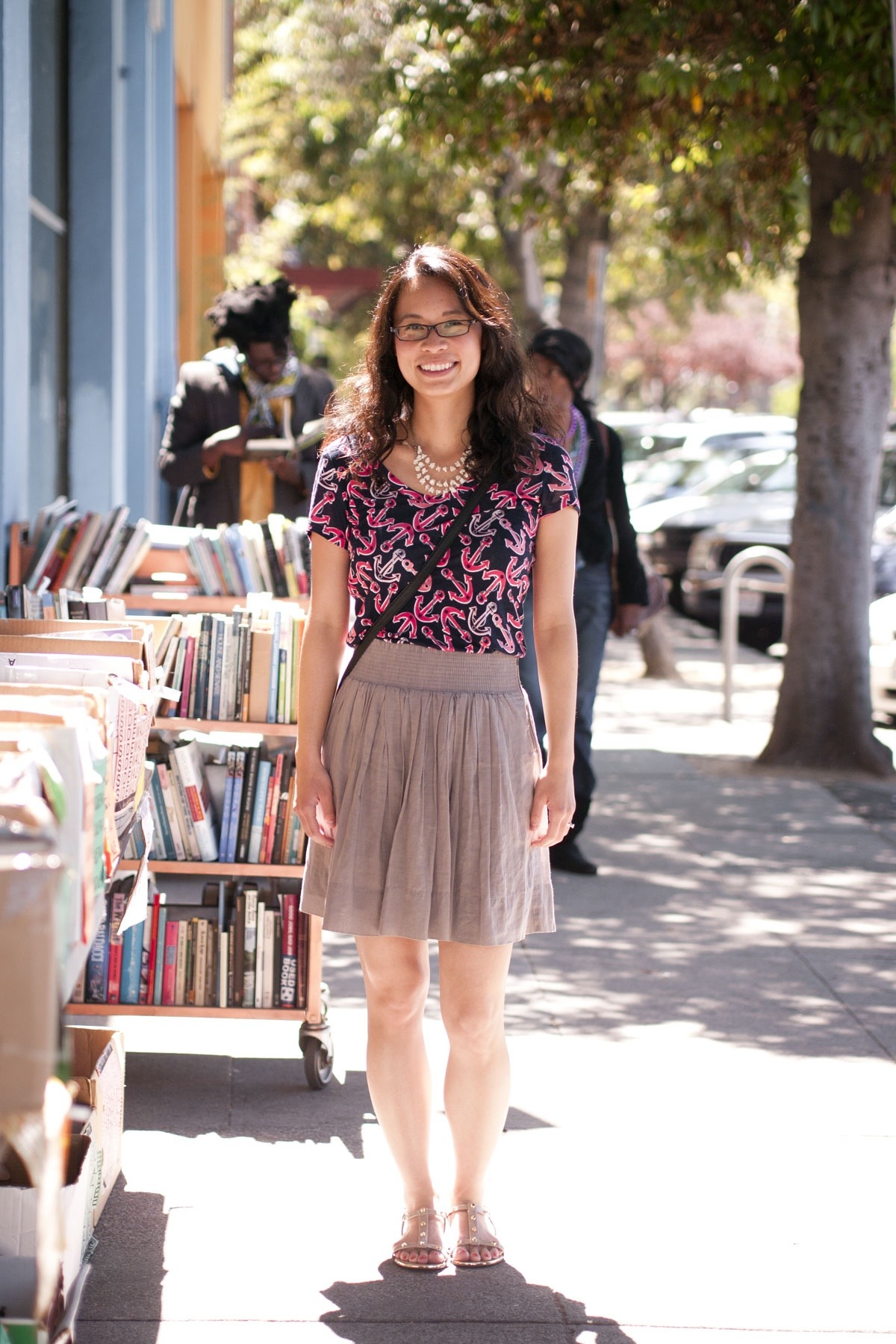 Now that I’m home I have to resort to my roommate’s door frame pull up bar, which isn’t nearly as cool.  Yawn.

So I was only joking when I said I would be in the bushes spying during my coworker’s proposal but then I thought it’d be a neat project to do and he did too.  Below are the results. 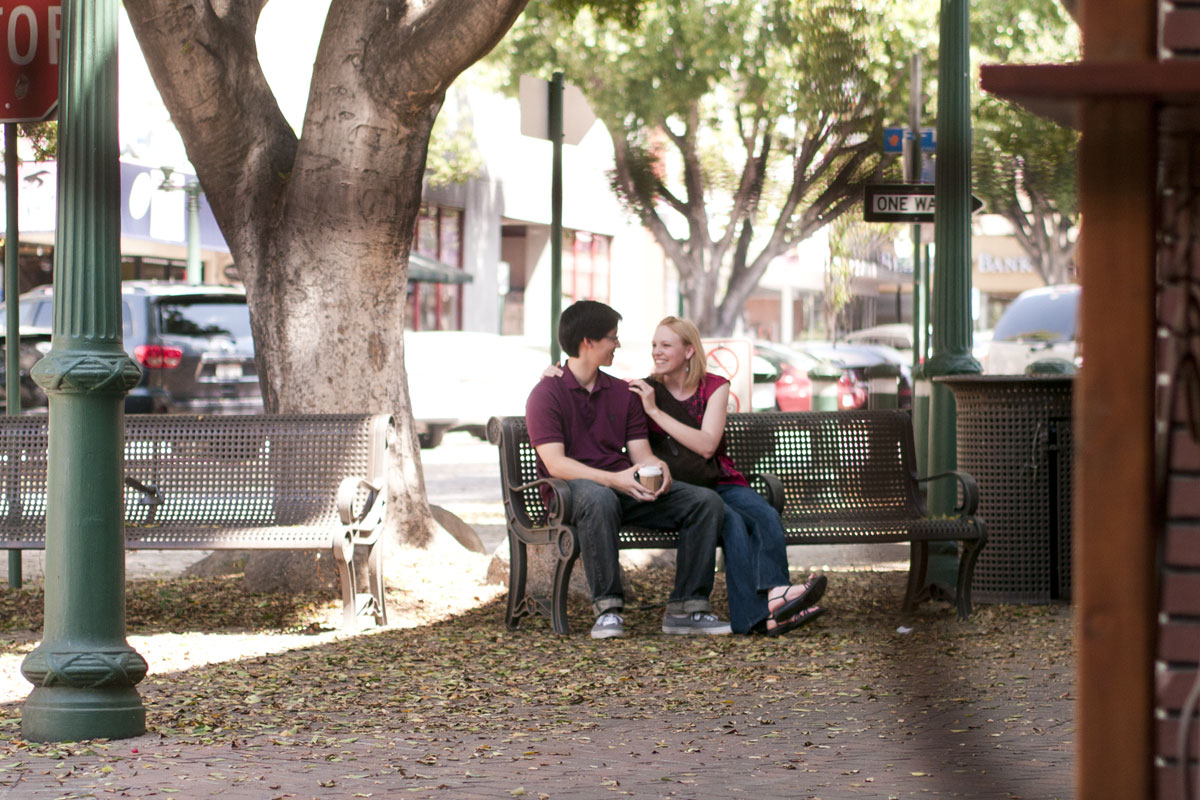 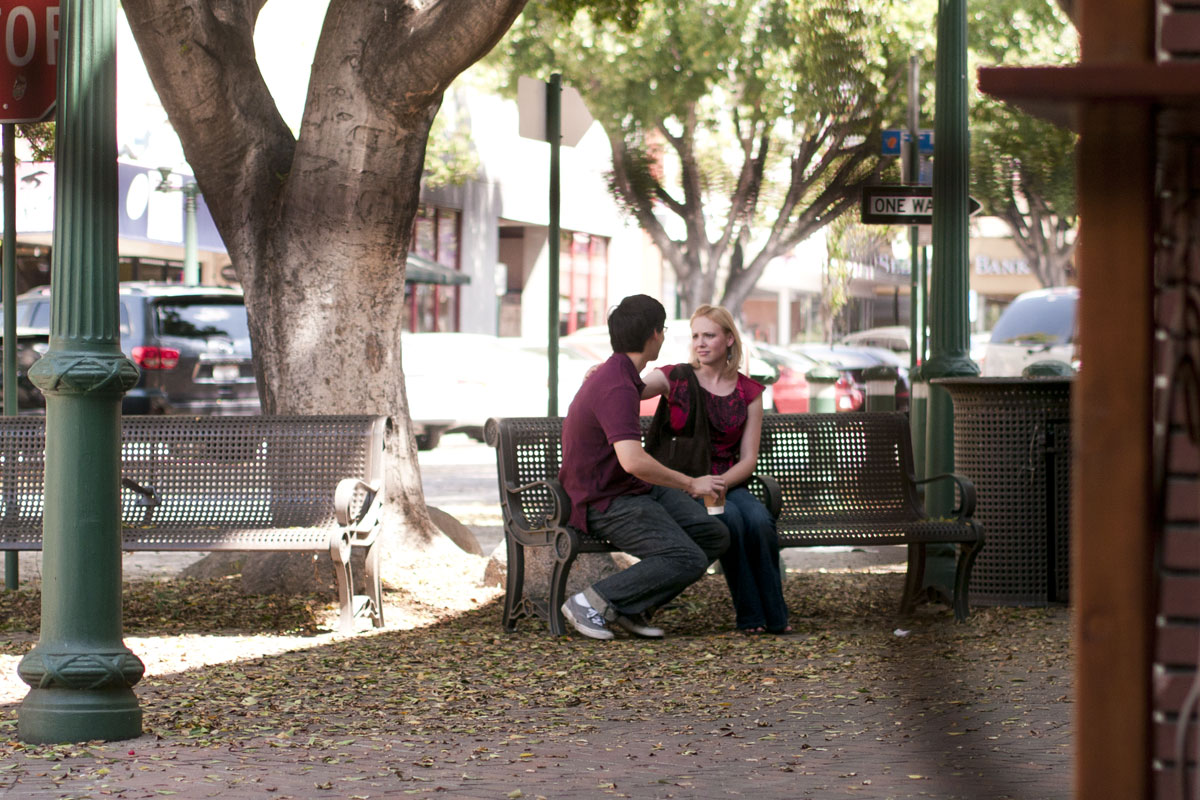 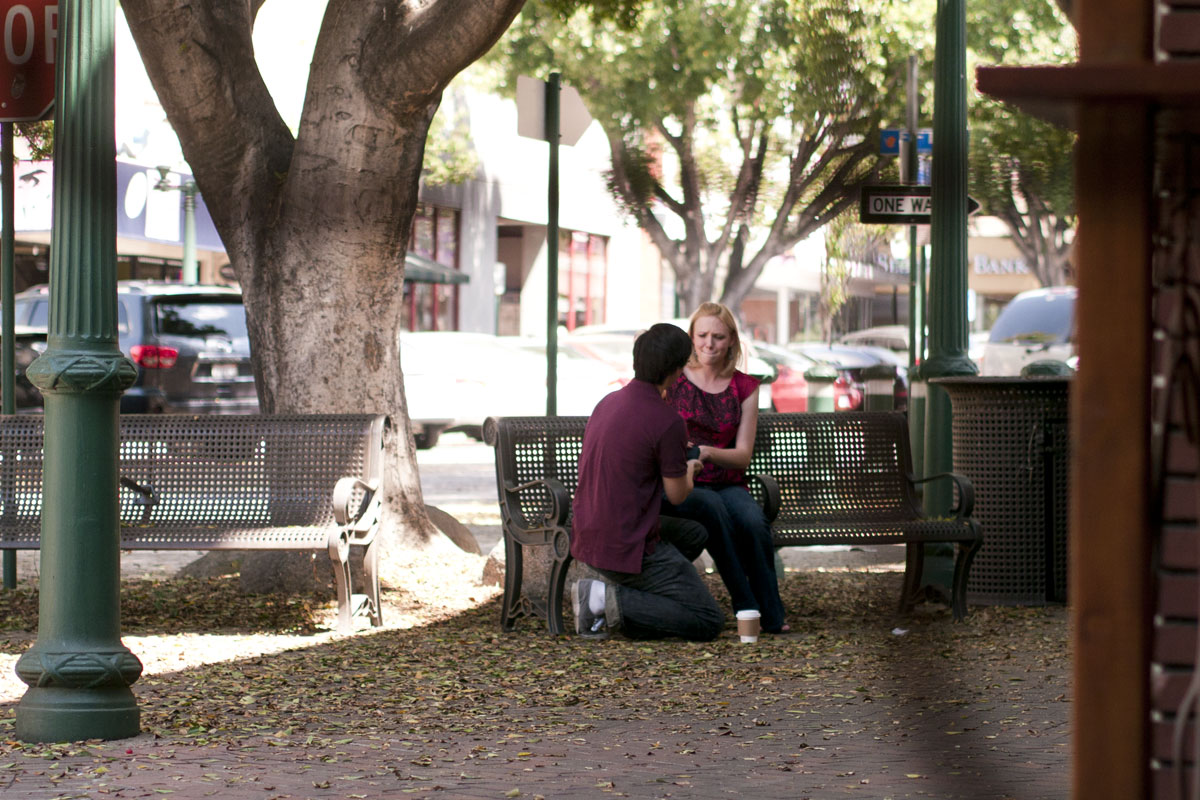 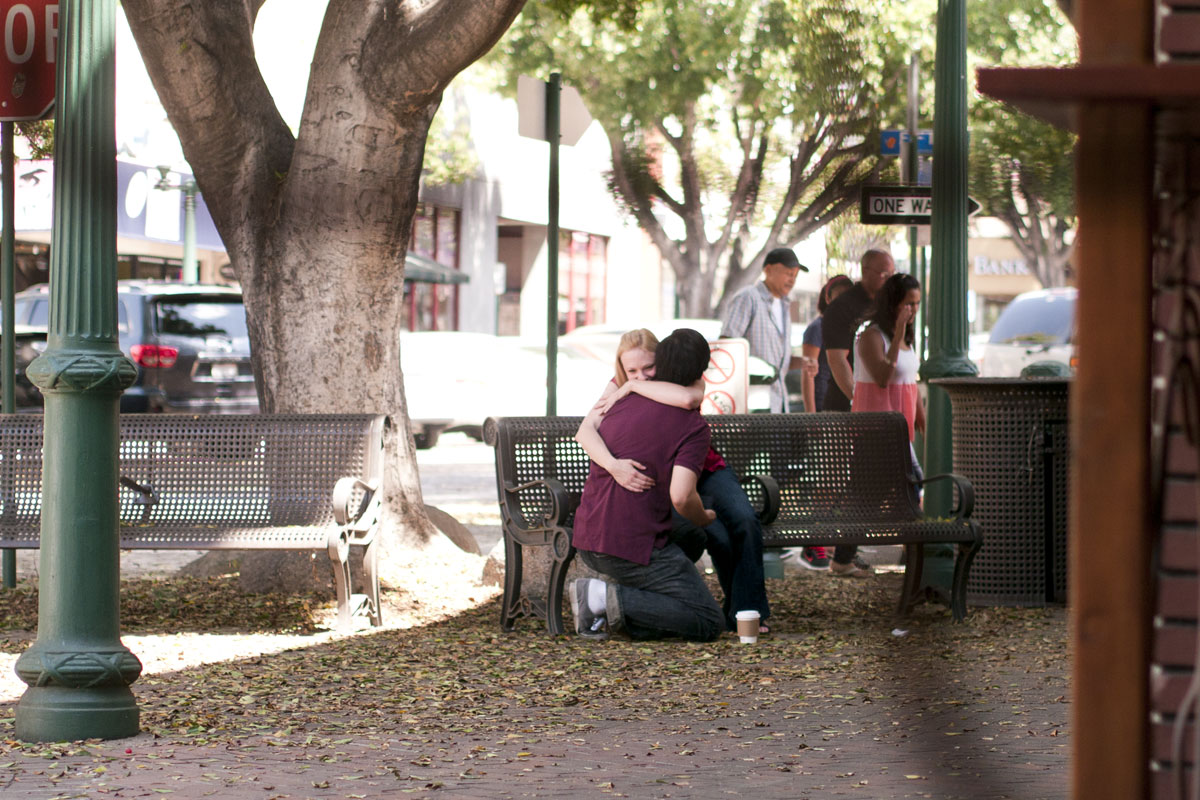 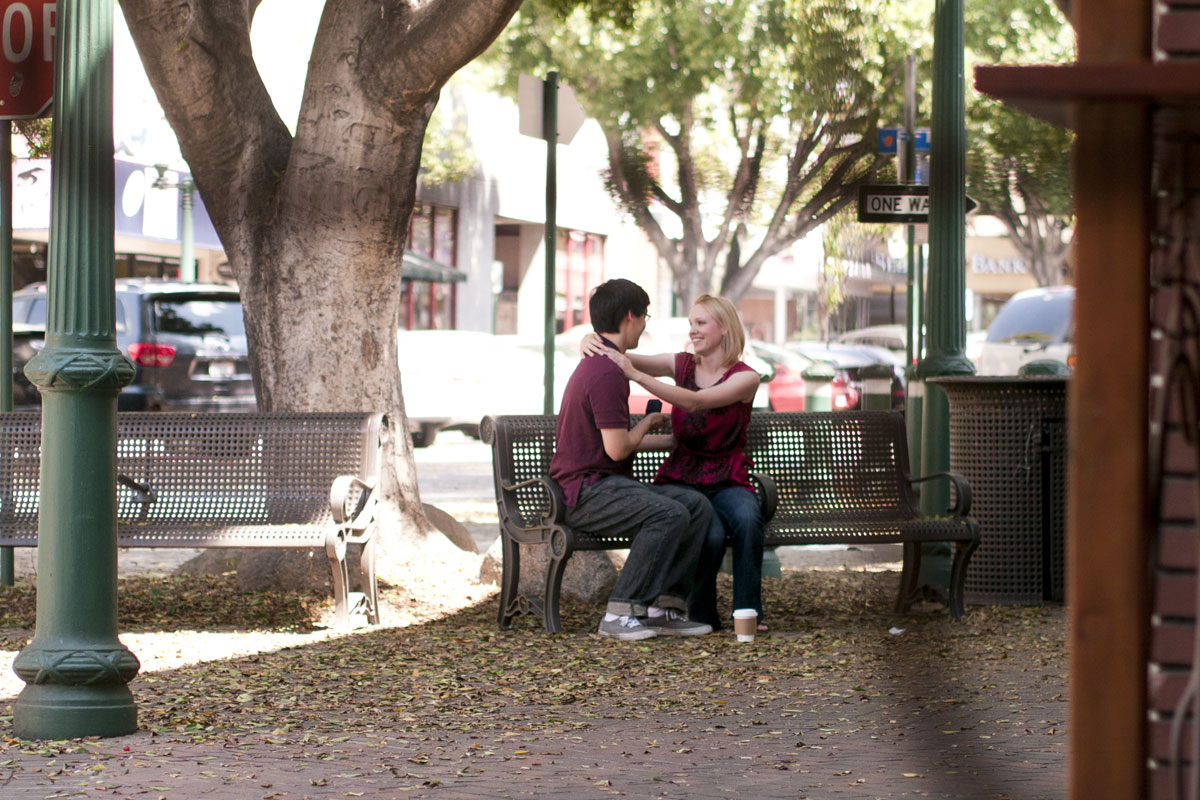 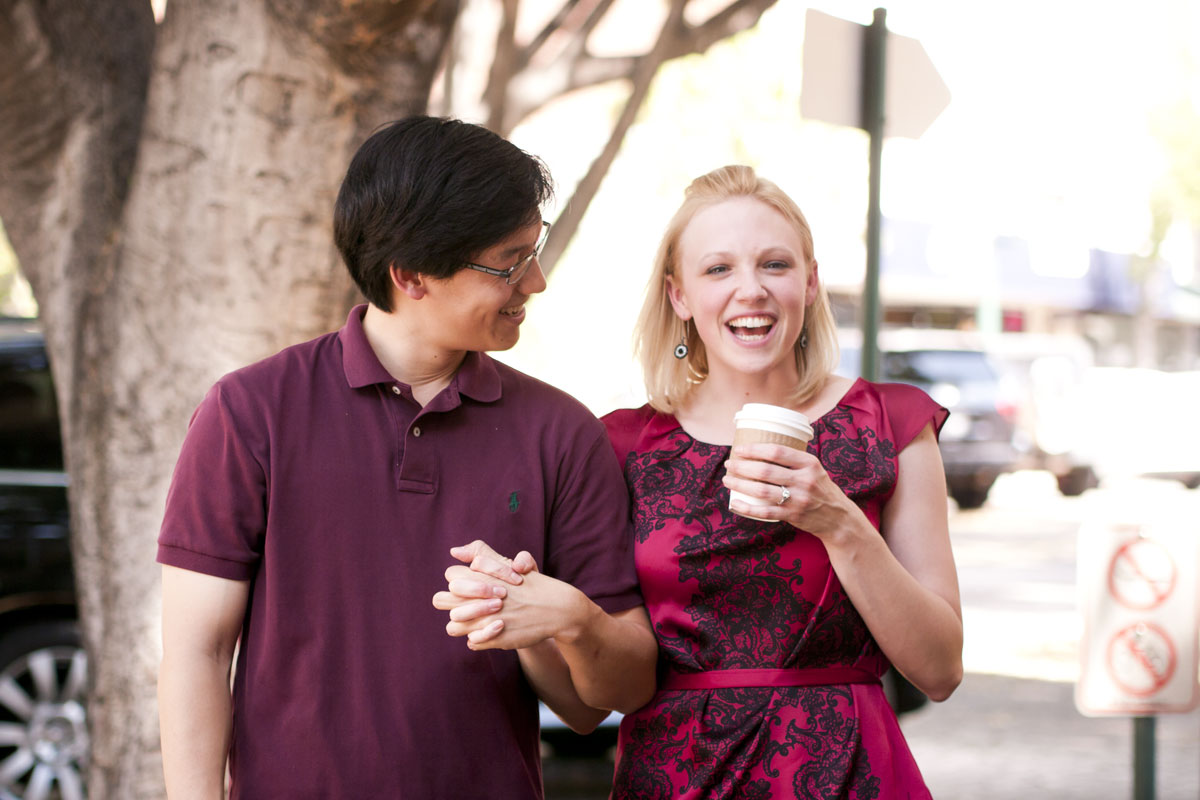 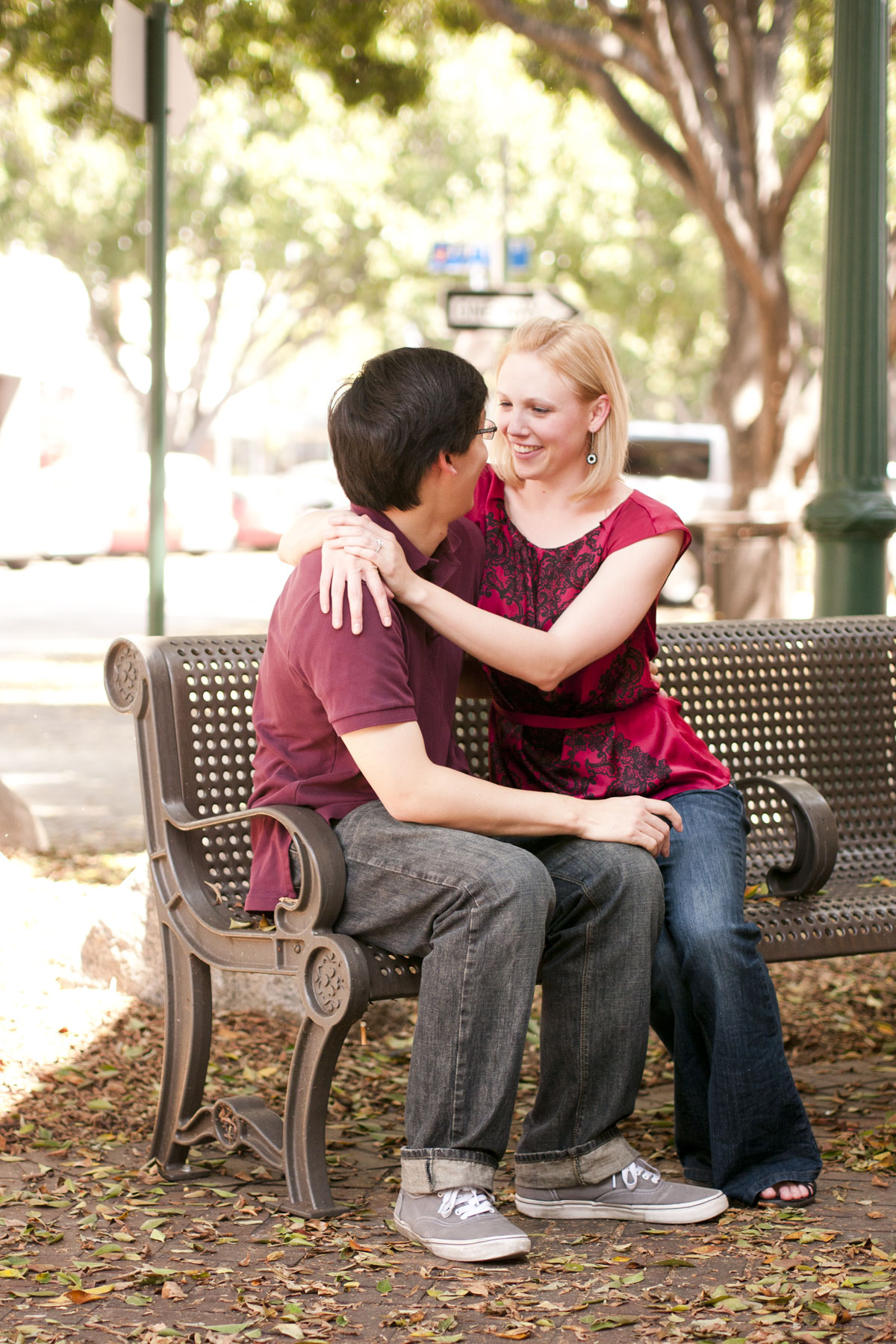 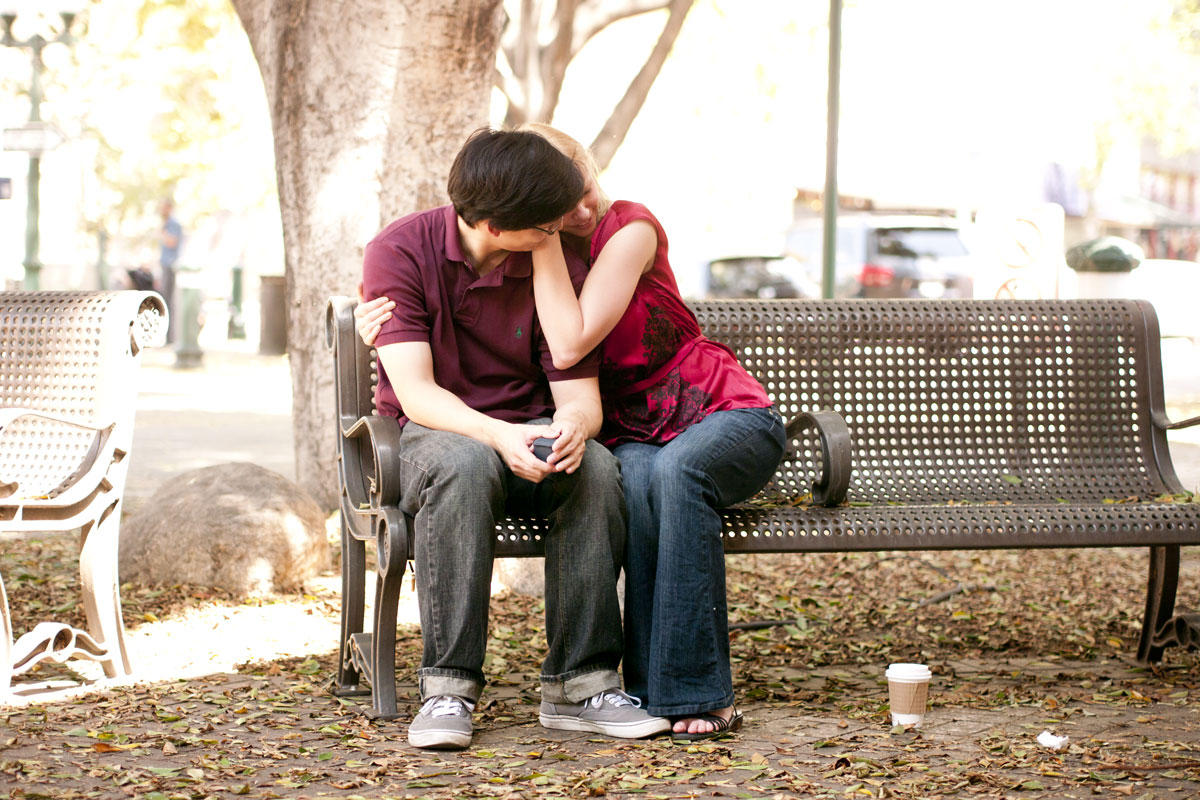 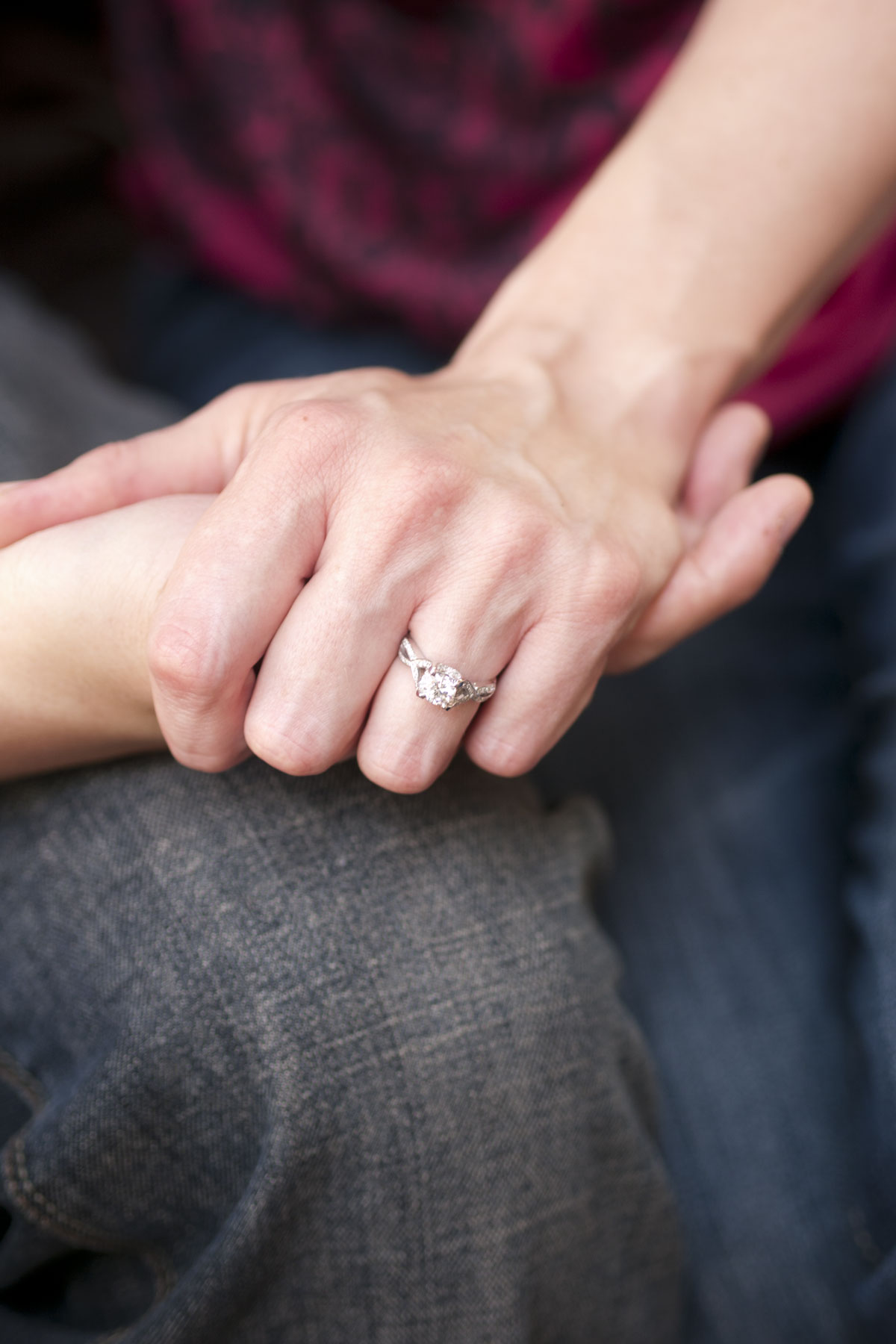 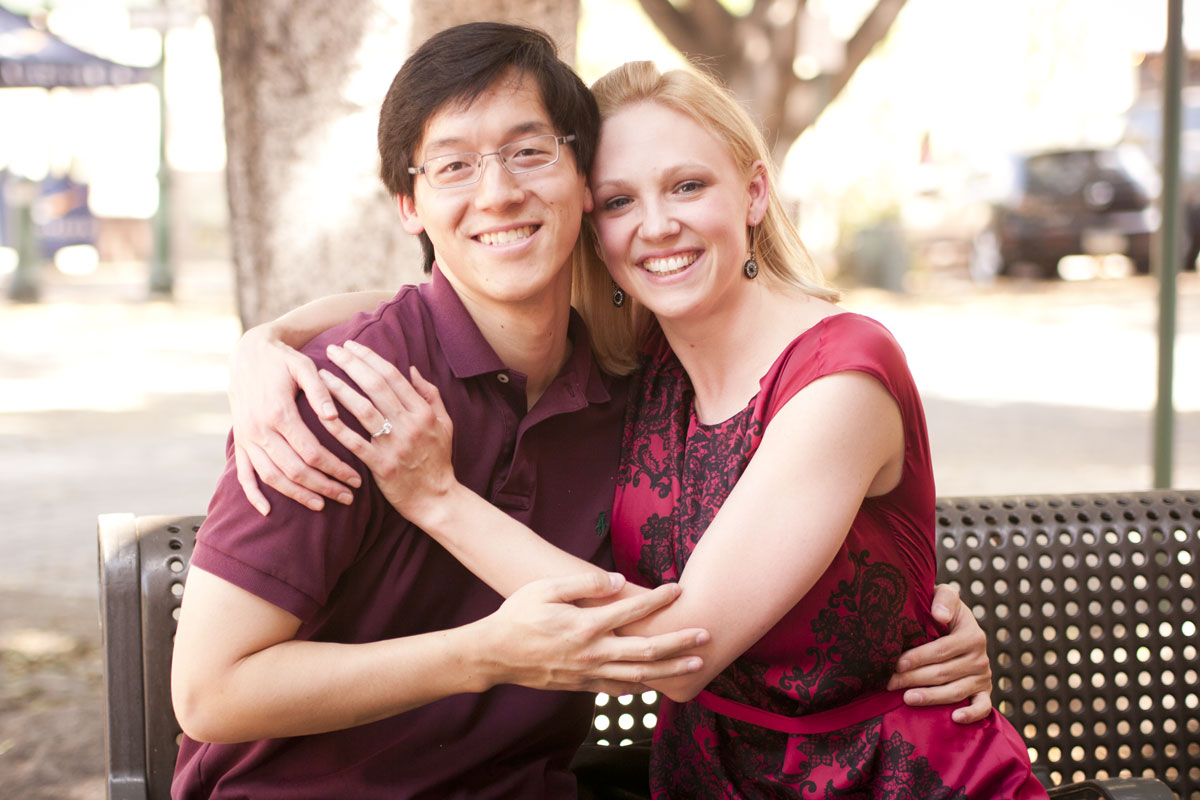 I was trying to be incognito so I put on my hoodie with the hood up (being the natural gansta that I am) and snuck into an empty storefront bench a bit away.

I finished my first pass through all 293 Group and Health Core exam flashcards. Phew! Now I have to go back and review the 292 cards which I’ve forgotten.

Today was a nice quiet Saturday — woke up, finished the P90X Shoulders and Arms DVD, assisted my roommate with lunch, and studied my notecards for hours and hours.  Progress is going slow.  I finished reviewing card #39 and most of the previous cards today and I have no idea how my coworkers were able to memorize 300 of these.  But I’m still going to try plugging away to see how far I can get. My roommate made some corned beef hash with fried egg and salad and I helped squeeze 15 limes to made limeade.  On the last one, the hinge of the lime squeezer snapped and I felt bad about it, but deep inside I secretly hoped it was some sign of latent super strength (and not cheaply made as my roommate suggested).  Perhaps all these curls are paying off.  With … broken kitchen utensils.  One of these days, laser beams are going to come out of my eyes, I just know it… 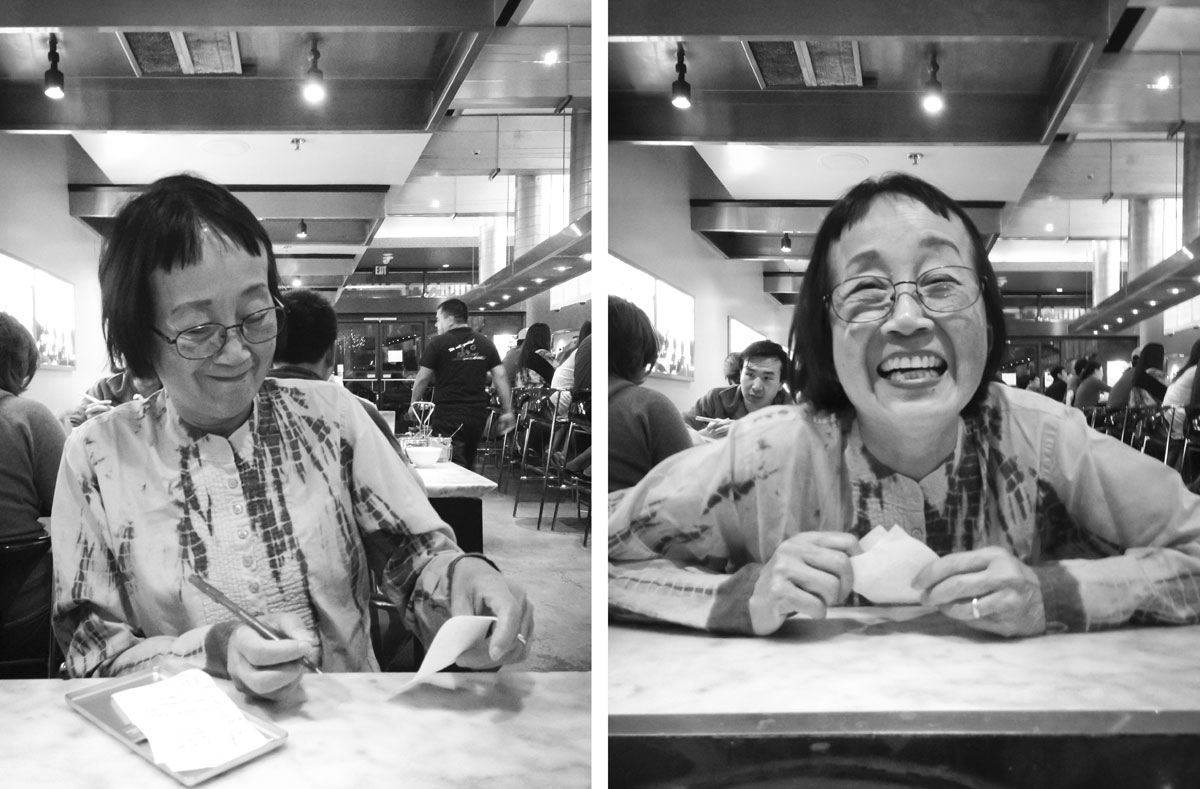 My mom, brother, and Rob were in town recently and Friday night I went out with my mom to eat Shabu Shabu in Pasadena.  We were both stuffed at the end.  She was really happy that the restaurants we’ve been to have gratuity already calculated on the receipt so she didn’t have to figure it out on her own.  I tested her 15% calculating ability of various numbers and she was able to do it fine, but I guess she just didn’t want to have to think about it. I don’t think my mom knew that I could take photos with my phone so I was able to get some candid shots while she chatted away.  It seems like most of the people I hang out with these days fear the camera like the plague (although to be fair I’m in the same boat).